People from Smith Creek and nearby neighborhoods along with local veterinarians and Wake County Animal Control are giving these feral cats a better life. We're doing Trap-Neuter-Release (TNR) to get the feral cats situation under control, and caring for them after they get released. Thanks to our neighbors at nextdoor.com, we have an estimated 3 month supply of food as of early August 2019.

The two male feral felines above are the "Duke" of Orange and Professor "Boots" McSqueemish. While the professor is a master of mind control over humans, the Dukester always gets his way just by charisma and being such a good kitty. They have both been feeding at our back deck since adopting us in 2018 and have become increasingly friendly. They both eat at the same time, from the same tray. When I tried to trap them, one went in one door of the trap and the other went in the other door. As the trap doors shut, they both made a fast escape! For now, they are still unneutered free-range kitties, but Gina from Safe Haven gave me good ideas for eventually apprehending these loveable desperadoes.

Remember: It's not their fault they're feral!

Our neighbor was found dead on July 16, 2019. He was the owner of indoor cats which, to the best of my knowledge, all became outdoor feral cats several years ago when the water pipes going to his house burst due to a lightning strike. Water to the house was never fixed and the outdoor cats eventually had litters of kittens that were fed, but not spayed, neutered, or vaccinated. After a while, this developed into a colony estimated (by his close friend) to be 20 feral cats.

On July 18th, our yard suddenly and 'lyrically' went from "Our house is a very very very fine house with two cats in the yard" to "cat scratch fever"! "Here a cat, there a cat, everywhere a kittie cat."

See video of Wake County Animal Control picking up 2 orange cats trapped on 8/1/2019. One of them is a male kitten and the other is of unknown gender and appears to be slightly older than the most recent litter of kittens. Wake County Animal Control has an excellent TNR program for feral cat colonies. They pick up trapped feral cats Monday through Thursday, spay or neuter, vaccinate for rabies protection, "tip" the ears so the cats can be identified as already treated and part of a feral community that has at least one caregiver, ID chip them, and release them back at the place they are familiar with. 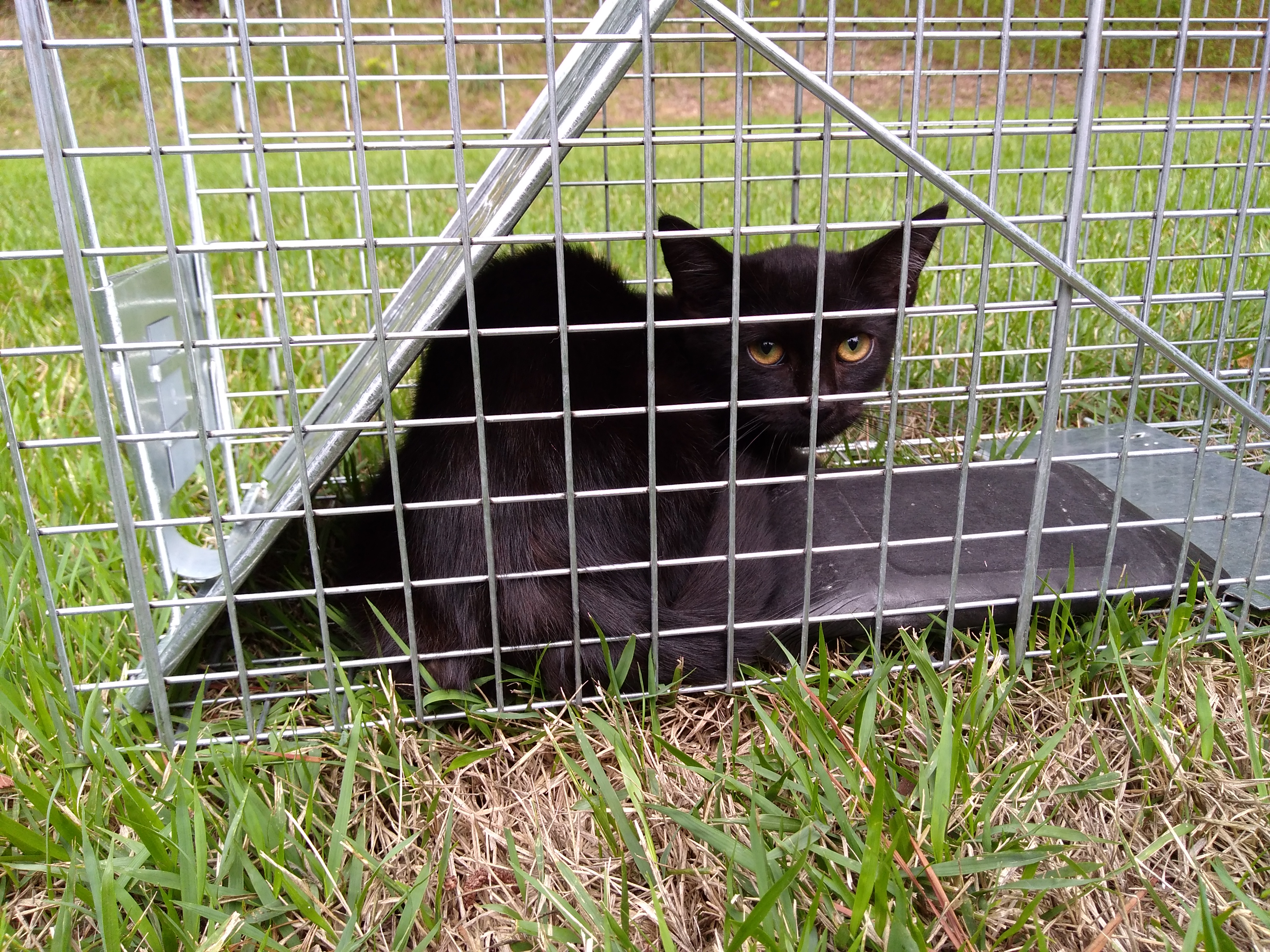 This pure black feral male kitten, "Midnight", was trapped on 8/7/2019, picked up by WCAC, and was returned and released on Monday 8/12. See video of Midnight release!

Also on 8/7/2019: Update on the calico "prettiest cat in the world" which I trapped last week and brought in to Capital Blvd Animal Hospital. She was treated and released at the end of last week and has been seen a few times since. Tonight she was eating on our back patio and appears quite healthy.

Animal Control released one more kitten on Friday, 8/8. The black kitten, Midnight, is still at Animal Control and might come home soon.